Friction materials history starts in England in 1897, thank to a certain Herbert Frood. He started by realising that the method employed to stop carriage and pair, based on a two matching linings or on a handle, was defective. In few words, it used to slide on back wheels rim iron or rubber cover. No matter what material the shoes were made of, or lined with, iron, cast iron, poplar wood, leather, camel skin, felt or anything else, the result was always the same: they all performed in the wrong way and consequently, they were inefficient because they tented to quickly wear, producing very different braking effects, according to the weather or the sole conditions. Recycling pieces of cotton straps, found in his father-in-law factory, Frood discovered that by hardening and soaking them into mineral oil, braking performances were definitely improved. From that point, researches continued up to the reaching of a patent in 1901. With the advent of cars, Frood soon realised the big problem with existing braking systems and the importance of guaranteeing to new vehicles an effective reliable braking system. The first experiments, consisting in cotton linings assembled on his car, failed due to strains and prolonged heat exposure. The answer arrived in 1912 with the devising of a soaked mineral fibre, subdue to a mould pressure to reduce its thickness, by bending it according to the assembly condition. In 1920 Herbert Frood Company established the renowned brand FERODO. 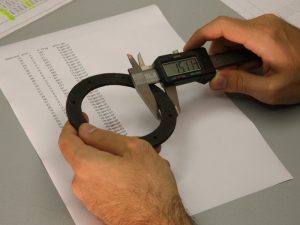